A little history of Chefchaouen 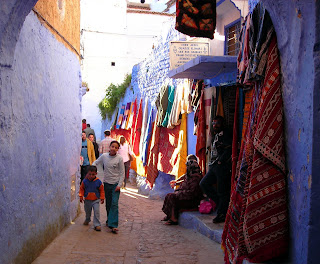 A LITTLE history of Chefchaouen, courtesy of http://www.chaouen.info/ and unedited, arrghh it was tough but I think it is much more charming in its original form.

A little history of Chefchaouen
The city of Chefchaouen was founded in 1471 by Mulay Alí Ben Rachid. Located in an enclave difficult to access it dominated the mercantile route between Tetuan and Fez and served as a base to restrain the entrance and influences of the Portuguese of Ceuta.
During 15th and 17th century the city prospered and grew in considerable form with the arrival of the moriscos and sefardíes who were expelled from Spain. Until nowadays the district Andalúz is one of the most popular of the medina.

The Kasbah was constructed by Mulay Alí Ben Rachid and soon recovered by Mulay Ismail at the end of 17th century to defend the city. First of all the Portuguese tried to attack the city then later the rebellious tribes Bereberes and after that the Spaniards tried to attack.
The city was closed to all the foreigners, especially to the Christians, until the beginning of the Spanish occupation in 1920.
However, at the end of 19th century the first travellers arrive: the French explorer Charles Foucauld, disguised as a rabbi; the English journalist Walter Harris as rifeño, and William Summers, an American missionary, who was poisoned and died there.
Between 1924 and 1926, during the war of the Rif, Abd-el Krim was able to expel the Spaniards, but these did not take long to occupy Chaouen again in September of 1926, this time they remained until the Moroccan independence in 1956.
Posted by Nena del Sur at 10:38 PM 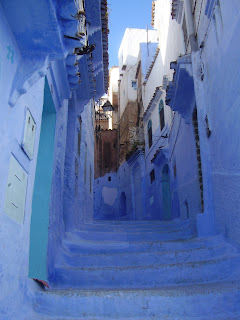 MARCH is here at last and our mini trip to Morocco is getting closer. I'm so looking forward to going back and to introducing the Hockey Star to a new culture. I want to see his face as his senses are assaulted with so many new sights, smells, sounds and sensations.

If his globetrotting sister was with us she'd be fascinated - there again so would the locals - with her.

This trip will be different of course -it's not the first, so it won't be as intense, but it will give me the opportunity to see things in a more familiar and relaxed light. I shall take fistfuls of batteries for my camera and dither outside little shop entrances trying to convince myself that I don't need to buy anything. What I will buy is orange blossom oil - just smelling it relaxes me instantly. And this time I will buy the rose petal cream - how did I come back last time without it?
Weather today: High 16ºC/61ºF Low 12ºC/54 ºF. Overcast with sunny spells. Moderate westerly wind 39km/h. Pressure 1017 mb. Relative humidity 47%. UV index: 4
Posted by Nena del Sur at 10:17 PM