A white Christmas at last 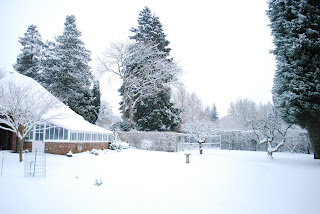 No dreaming needed here, everything was white 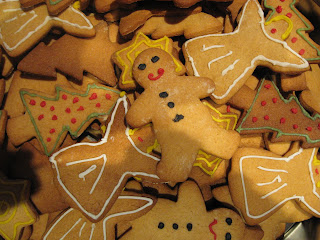 Mini Mama's incredibly delicious gingerbread cookies
Sigh.  Back to work although I had a marvellous Christmas in the .  My first white Christmas since I was about six years old although I didn’t have as much fun in the snow this time.  Back then I was an energetic little madame and revelled in the stuff.  Now I’m post hysterectomy, of a ripe age and worried about ripping my stitches, so no snowman building, snowball fights or treks through the countryside, but plenty of laughs inside the house instead.
We almost didn't make the trip what with Heathrow being snowed in, but after much nail-biting, and angst-ridden moments the Hockey Star and I flew into LHR just as the snow passenger back log cleared.
Literally the first day the airport was just about back to normal.
Before we started our journey I had the uncomfortable feeling we were ‘flying into the storm’, especially after our flight the day before was cancelled.  But we got away with just a three-hour delay. The HS carried cases, hand luggage, coats, the lot – he trundled along endless kilometres of airport passages laden down like a Tibetan sherpa’s donkey while I, Lady Muck, swanned along behind him.  I could get used to this "I've just had an operation" lark.  Still he carried out his task in good humour.
Even so I was surprised just how tiring I found the trip.
Waiting for us at the other end were Mini Mama, Grammy and Grampa, The Beast, Auntie and The Boys (three of my nephews).
Roads were icy and fields covered in snow so it was batten down the hatches and enjoy the company.  Mini Mama had baked her heart out and Grammy had a fine menu prepared.  Christmas trees sparkled in every room; games were on the table; presents were stacked high; CD choirs were harking the heralds and the fire was lit, though not perhaps roaring, and we truly had a memorable time.
But before we knew it, the Hockey Star and I had been hurtled back across the sky courtesy of BA and , who were good enough to bring our cases along.  And here we are – back in our daily bubble – having said a sad farewell to the family, especially to Mini Mama.
The Artist, who knows what a good appetite I have, was waiting to meet us off the plane, armed with homemade soup, crusty bread and a large leg of Serrano ham which sent the Hockey Star into a frenzy.
Alas, today I have returned to the office in the midst of a deadline and wheeled myself back behind my desk hoping no one would notice I was back.
The day has gone well, although I haven’t resolved the problem yet of how to wish readers a Happy New Year when the splash is about a massive 10% electricity price hike that comes into force on January 1.  Plus a gas price hike too.
After all you can't write "Happy New Year"and right underneath have Price Hike Start to 2011. Sounds sort of sarky or contradictory. Will try to resolve tomorrow - my brain cell is about as nimble as a farmer whose welly has got stuck in the mud.  I’m sure it’s been knocked for six by the anaesthetic. I’m just hoping it’ll get back to normal some time soon because this floundering feeling is very disconcerting.
Weather today: Grey, grey, grey  – but hey, a lot warmer than the where we spent Christmas. High 17ºC/63ºF. Low 9ºC/48ºF.   Wind, easterly 14kms/h.  Pressure 1016 mb and dropping. Relative humidity 67%. UV Index 2.  15% chance of rain. Snow above – They’re not saying.  Perhaps because they don’t expect any.